skip to main | skip to sidebar

Tragic Death of a Tigress in Bandhavgarh..

We lost a beautiful Tigress in Bandhavgarh and the double tragedy is that she has three lovely Cubs, which are about 4-5 months old..so we have effectively lost 4 wild Tigers!! So who is to be blamed for this tragedy and will the real culprits be ever found?! 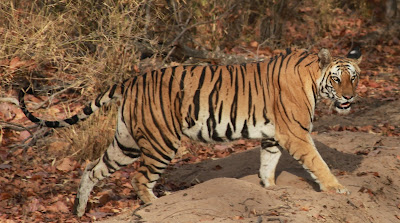 The Jhurjhura Tigress (also known as Rajbehera Tigress, whose photos and story is in my blog as an earlier entry). These photos were taken by one of our Guests, Dr.Muffi..and could be one of the last of the Cubs in the wild. 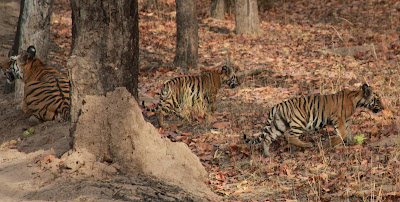 Two of her three Cubs..cannot imagine their fate now! As we speak they are being fed by goat meat..but they are certain to end up in a Zoo soon.
I am currently in Bandhavgarh since two weeks and i could gather the following story from various sources; but first the sequence of events on the fateful morning of 19th May, when the Tigress died:
1. A vehicle from a Lodge, driven by one of the most mild-mannered and liked Naturalists in the Park, saw the Tigress at the Jhurjhura waterhole at about 6.10 am..and she charged at them! She looked injured..and the Naturalist promptly reported that to the Park authorities. In fact, i met him and his frightened guests and he told me about the encounter and asked us to avoid that area.
2. The area was promptly closed and the Park authorities went to investigate; they also got charged by the engraged Tigress and driver in his fright or whatever hit the Tigress while reversing the vehicle..the evidence is clear on the ground by a damaged machan and also the vehicle was damaged in several places.
3. When they approached the area again later..they found the Tigress dead.The time was 9.20 am.
What could have happened? Why was the Tigress charging at any vehicle? The post-mortem conducted on her the next morning revealed that the death was caused by injuries sustained 6-7 hours back..that means at around 2-3 am in the wee hours of the morning. No other vehicle can possibly enter the Park but a Forest Department (FD) vehicle. So it is clear that a speeding FD vehicle hit the Tiger and whoever did that hushed up the matter. No wonder the Tigress was aggressive and charging at any vehicle on sight. In fact, this particular Tigress is known for it's extremely non-agressive nature in the whole Park.
As expected, the blame game started..the Park officials caught hold of the last tourists who reported the incident in the first place..they wanted them to implicate the Naturalist-driver..the very man who probably saved their life by showing presence of mind and driving away! The officers intention was clear..they wanted to find a scape-goat! They harrased every other vehicle on that route..summoned them to the Park office in Umaria (30 kms away) repeatedly. But fortunately the Park Director is a upright and a strict officer..he smelt a rat..and on the 25th May ordered the suspension of 3 officers and ordered an independent enquiry. Let's hope the truth will come out.
I cannot believe that when the whole Nation is so worried about the dwindling numbers of this magnificent Big Cat, some officers who are responsible for it's very protection..in one of India's best known Tiger Reserves..can be so callous! We, all the wildlife lovers, have to put immense pressure on the powers-to-be to catch hold of the guilty and give them exemplary punishment. There are rumours that a minister's son was taken inside the Park for a night drive..whatever the truth is and whatever it takes to bring it out..we have to act together and make an example out of this case. The culprits have to charged with the murder of four Tigers...and given the highest possible punishment.
The Forest Department should be forced to pull up it's socks. It is a department, at least at the Park level, with a almost feudal mind-set and works in a way which is not accountable and does fit into to rest of the democratic system. I have observed it closely for nearly 20 years now! For instance, in Kanha, we never see a FD vehicle drive slowly in the Park! They race down at 60-80 kmph and at the same time regularly penalise tourist vehicles which are supposed to be driving at 20 kmph for over-speeding! On several occasions, they 'banned' tourist vehicles without even hearing the other side of any incident..totally against the principles of 'natural justice'. Once, in Pench, i was driving a Range Officer and some researchers..he reprimanded me why i was driving like a 'tourist vehicle'! He meant i was driving too slow!!
I dread to think that we are entrusting them with the protection of our Tigers and Parks!
Another very alarming issue we need to address immediately is about the so called VIP's in the Park. These govt officers make a mockery of the Park rules.Their vehicles do not follow any Park rules of timings, speed and routes. They flout all these rules right in front of the bonafide international and national tourists who have paid full fees and have every right to enjoy the Park. For instance, after the tragic death of the Jhurjhura Tigress, the area where her Cubs were found is prohibited for any regular visitor..in fact, half the Park is closed for them. But the 'VIP' vehicles are merrily going into this area with families in tow, making such a mockery of the great pre-cautions taken by the Park authorities.
These issues only reflect the mind-set of the Forest Department..specially at the ground-level..where all the protection takes place. Can we trust these officers to be committed, self-disciplined and motivated enough to protect our Tigers and wildlife? I doubt it very much...
Let us all get together and mount pressure on the authorities both in Bhopal and Delhi to move swiftly in this case, investigate thoroughly and nail the guilty. They should be given the harshest punishment possible under the Wildlife Protection Act and this should be highlighted as a test case..that the Nation will not tolerate any harm done to it's Tigers. Please write in your comments and i will bring this to the attention of the Chief Wildlife Warden, M.P and other higher officials in Delhi.
Posted by Sarath C R at 8:57 PM 10 comments:

Panna birds and a Tigress !

Panna is an amazing place for watching birds..a well kept secret? For instance, this is one of the few Parks where you get to see 7 species of Vultures!! Four species are resident and are also breeding: Long-billed, White-rumped, Egyptian, Red-headed and both the Griffons-Himalayan and Eurasian plus the Cinereous have been spotted this winter! 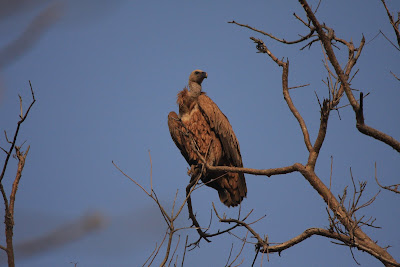 The Eurasian Griffon-seen in April. 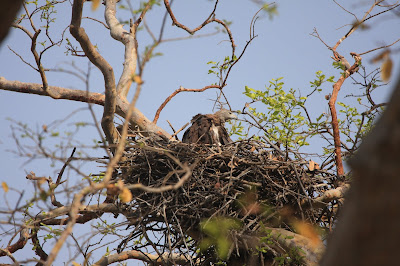 Young one of a Grey-Headed Fish Eagle in it's nest-on the banks of the pretty Ken River. 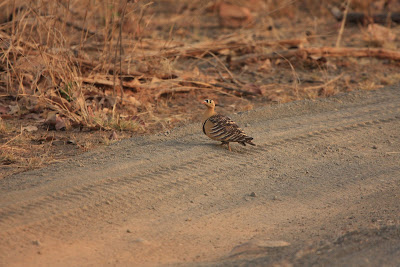 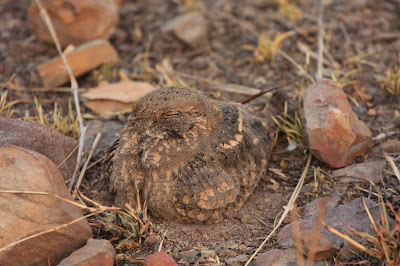 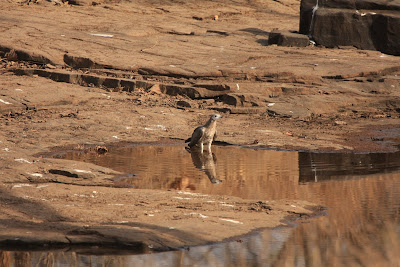 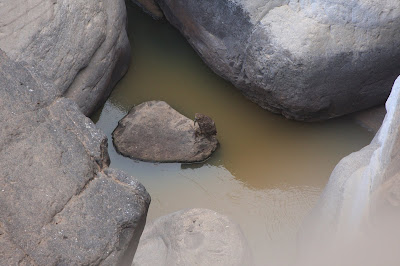 A Brown Fish Owl-with a fish it just hunted! 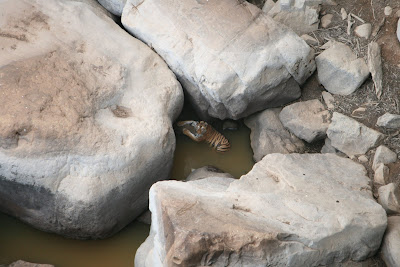 And a Tigress in the same pool at Dundhwa Seha-a prominent gorge in Panna ! This photo was taken by my Naturalist-colleague Hada, who managed to see this Tigress (translocated from Bandhavgarh) two weeks before she gave birth to 3 Cubs (May first week) and made National news! Fresh news..she gave birth to 4 Cubs!!
Posted by Sarath C R at 1:38 AM No comments:

Bandhavgarh is a gem of a Park and despite the heat, the crowds and the unruly behaviour of some people, it still worth a visit! I spent 4 lovely days in this Park recently and was rewarded with some amazing sightings! 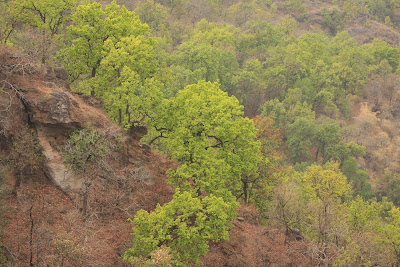 View of the surrounding jungle from the Fort, which is sadly ignored by most visitors! We saw very fresh Pug marks of the Dominant male Tiger, B2 on a hot summer afternoon..he had emerged from a deep pool of water, just before our jeep reached there and we could see droplets of water on his tracks...and i could 'feel' his presence!!
I have this strange bond with him..he always makes an appearance for me..and i was so thrilled that in my first drive itself..and that too in the most unlikely place..on top of the Fort, i saw his fresh Tracks!! 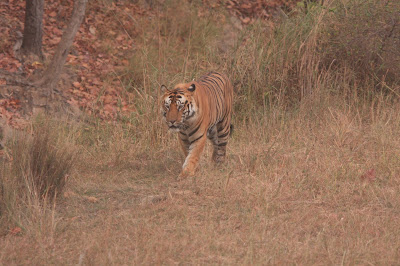 The 'new male' seen in Chakradhara meadow..the heart of B2's territory! He is B2's son and is about six years old and in prime condition! He is called, 'Bamera male' and is challenging B2 for his territory!! 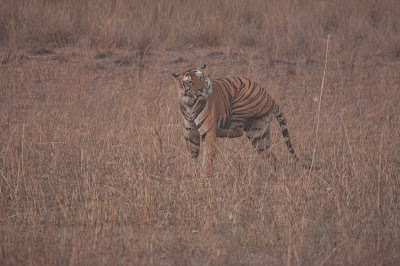 He paused to scratch himself..with his tongue sticking out, he made a funny sight! 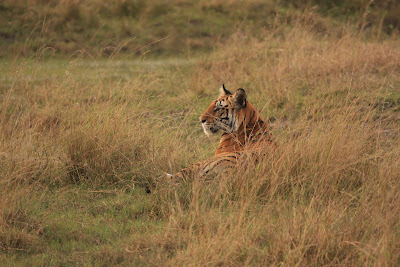 A young Tigress at Rajbehera..she is about 3 years old..and shares her mother's territory. 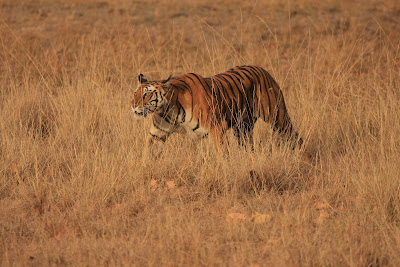 As we were watching the young female, her mother walked into the Rajbehera meadow! 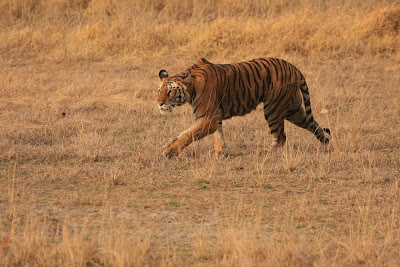 She was obviously keen on a hunt and began to stalk some Chital and a few Sambar grazing not very far away ! 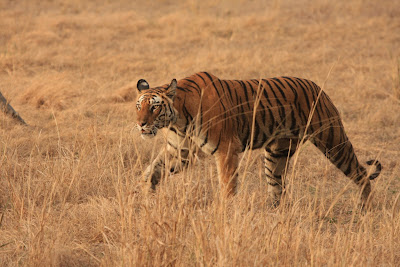 She is so graceful and lithe in her movements..she has a new litter of 3 four-month old Cubs. 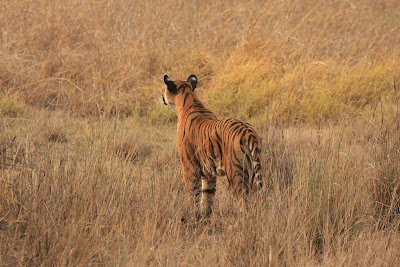 Checking out the position of the potential prey! 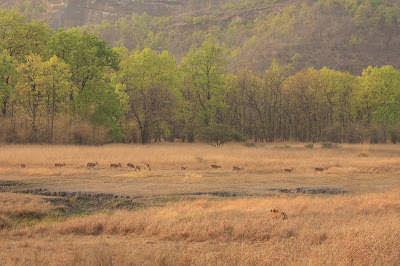 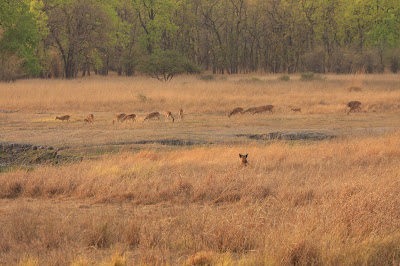 She was within 20 meters of the unsuspecting Deer! We had to leave unfortunately..as it was time..but i was sure, she made a kill after the light failed and gave her the advantage of darkness.. 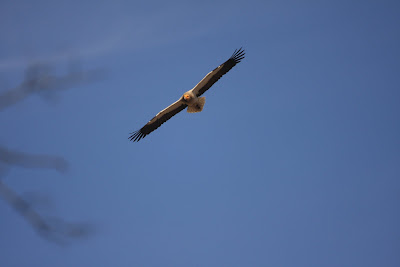 A beautiful Egyptian Vulture in flight... 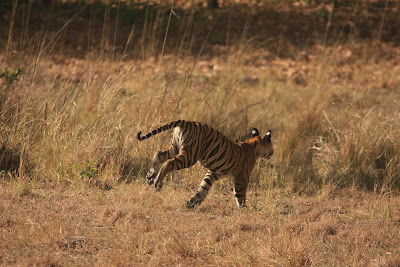 The Mirchaini Cubs in action! The female made a dash across the small meadow! Their mother must have gone on a hunt..and they were shy and tentative..about 8-9 months old? 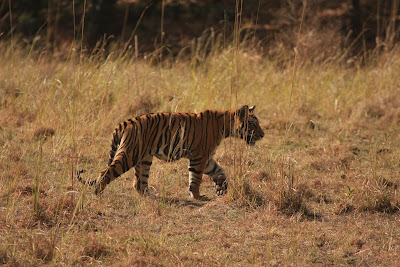 The male Cub was much bolder as he walked in the open... 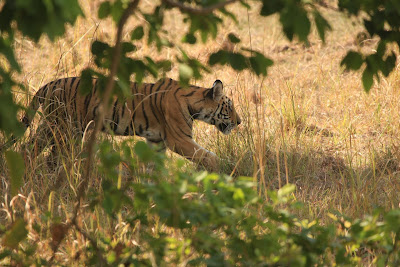 A curious new-born infant..peering from the security of her mother's lap...at the strange new world! I am not sure if it knows that it is destined to have a lot of fun as a Langur! I always envy their fun-filled and carefree life in the jungle-there's never a dull moment!
Posted by Sarath C R at 11:11 PM No comments: